Battles for seats on the Las Vegas city council are crossing ward lines as the race enters its final days, with the husband of Ward 1 candidate Brian Knudsen calling Ward 2 candidate Victoria Seaman the c-word in an email obtained by the Current.

On Tuesday, Seaman sent out a campaign email regarding one of her opponents in the Ward 2 race, Hillarie Grey. Knudsen’s husband, Brian P. Eagan, responded “You’re an awful c**t that should never, ever be in a position of power.”

Seaman responded “You’re not much of a man to call women names like this.” 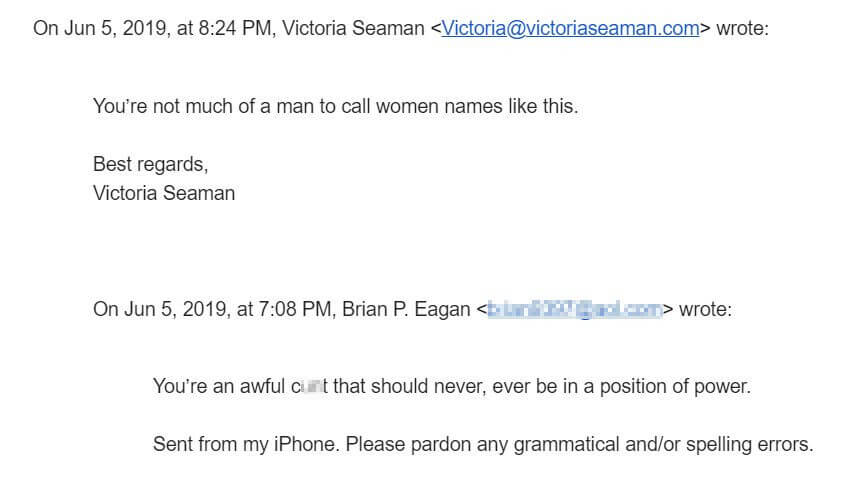 “I was shocked when I received the email.  It’s one such word used by men with a deep-seated hatred of women,” Seaman said in a statement. “Sadly, he used the word for no other reason than to express his hate for me.  It was unsolicited and unprovoked; I had not said a word against him or his husband Brian Knudsen.”

“I completely apologize for what I said,” Eagan told the Current.  “I’ve personally spoken with Victoria and apologized.”

Eagan says his anger at Seaman was misdirected, adding he’s really upset with messaging he attributes to Seaman’s campaign manager, Tom Letizia, who Eagan says is working on behalf of an independent expenditure group targeting Knudsen.

“I was frustrated. It was completely misdirected and misguided and I own it,” says Eagan.  “Brian was livid with me.  That’s not his brand at all.  That’s not how he holds himself.”

Eagan says he and Seaman commiserated about the effects of campaign on spouses.

“Obviously, being an openly gay couple with children, we’ve been getting a lot of hate comments” Eagan says. “We’re people who have a lot of women in our lives.  It’s not emblematic of how I feel.

Friday is the final day of early voting in municipal races. The election is Tuesday, June 11.

Note: This story was updated with comment from Brian Eagan.

What every Nevadan should know about Wynn’s new Boston casino

Despite DNC recommendations, Nevada Dems sticking with caucus in 2020