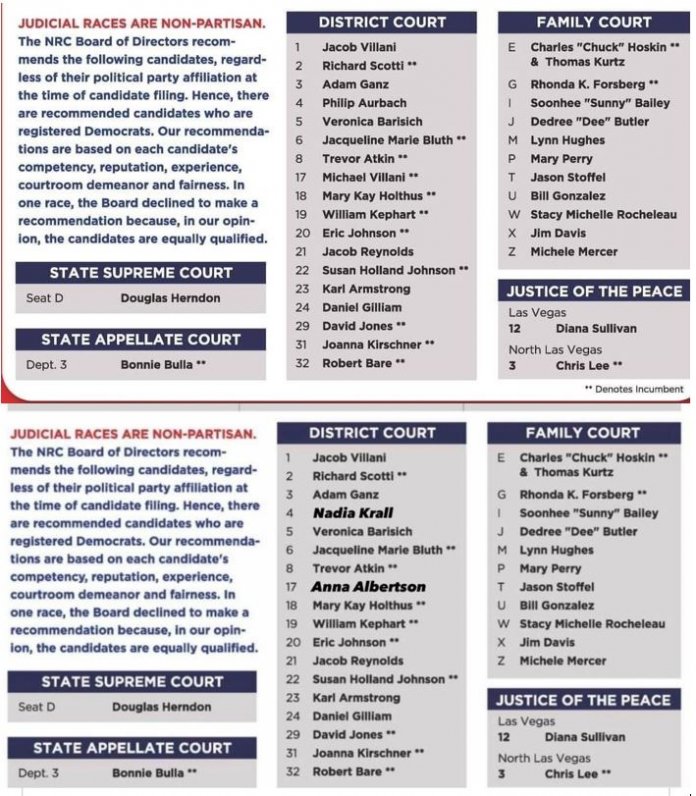 A fake roster of candidates purported to be those endorsed by the Nevada Republican Club has been removed from Facebook after making the rounds on social media. The list replaces the NRC’s chosen candidates in two district court races.

The fake version, which was posted under a Facebook account with the name Nevada Freeman, lists Nadia Krall as the chosen candidate in Department 4 and Anna Albertson in Department 17. Krall and Albertson’s names are the only two judicial candidates featured in bold print.

Sarah Cirillo, who is running Krall’s campaign, says she knows who is behind the fake ad but won’t say.

“I met him last night at the Clark County Republican Party at the debate,” says Cirillo. “I thought it (the fake roster) was funny so I forwarded it.  I posted it on my (Facebook) feed.”

Nevada Republican Club official Mikey Colian commented on Facebook that Nevada Freeman “committed fraud by illegally changing and replacing names…” on the roster.  Colian threatened to report the posting to Facebook. It has since been removed.

Albertson, who wrote a comment thanking the poster, said she “thought this was a personal endorsement from an individual.”

Krall, who also thanked Nevada Freeman on Facebook for the endorsement, did not respond to requests for comment.

The fraudulent GOP voter guide surfaced as Krall came under fire from voters for an ad on her campaign’s Facebook page alleging U.S. Rep. Dina Titus, who endorsed Krall’s opponent Phil Aurbach, is a “Democratic Socialist.” The ad has since been removed according to Cirillo, who says Krall ordered it removed when she saw it.

“I take full responsibility,” says Cirillo, who says she gave the campaign’s political advertising company, McShane, carte blanche to do as it pleased. Cirillo says it was McShane that dubbed Titus a “Democratic Socialist.”  The company said it was investigating but did not respond.

The highly partisan ad conflicted with Krall’s announcement just weeks ago that she was dropping her Democratic party affiliation in keeping with the non-partisan nature of judicial races.

“… it has become apparent that to many voters the party affiliation of judicial candidates matters more than their legal philosophy. This despite the NP label next to our names on the ballot,” she said in a message to supporters.

“I wasn’t prepared for the negativity,” says Aurbach, adding the tone of Krall’s campaign against him is the biggest surprise of his experience as a candidate.

Facebook commenters who said they previously supported Krall said they were withdrawing their support in light of the ad calling Titus a “Democratic Socialist.”