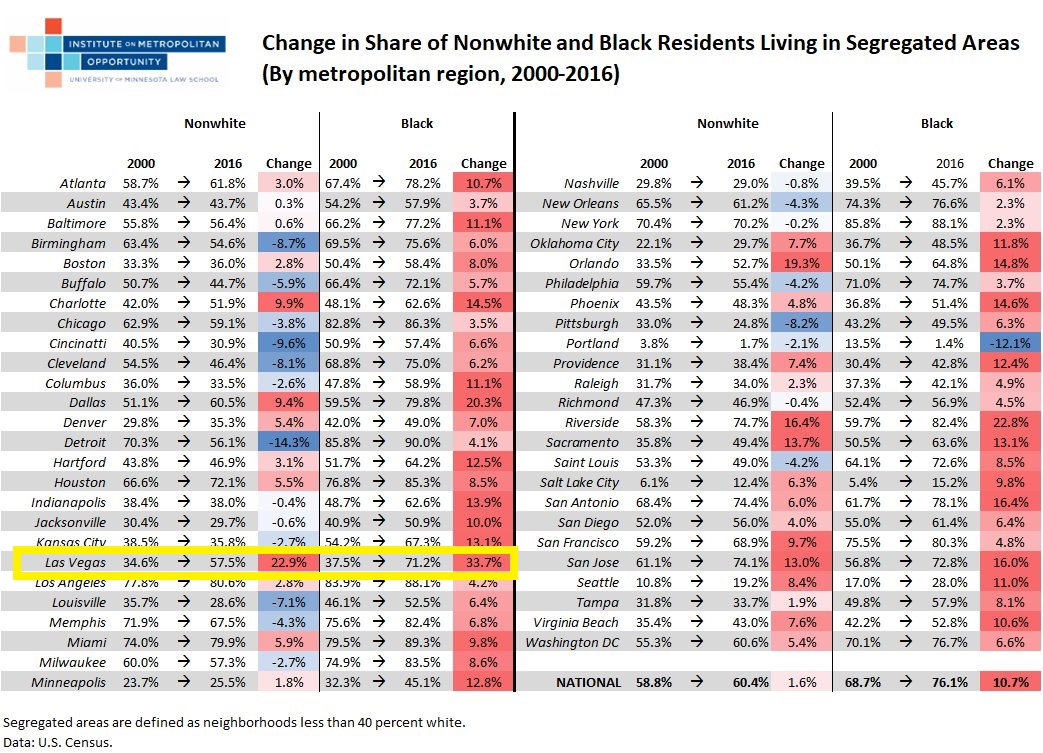 A University of Minnesota researcher this week compiled some statistics on the increasing segregation of U.S. cities between 2000 and 2016, and Las Vegas really stands out.

Specifically, in 2000, 37.5 percent of black Las Vegas metro area residents lived in segregated areas. In 2016, it was 71.2 percent, according to a chart compiled by Will Stancil, a research fellow at the Institute of Metropolitan Opportunity at the University of Minnesota.

The 33.7 percent difference between 2000 and 2016 is easily the largest of any of the cities Stancil included on his list. Similarly, a difference of 22.9 percent of nonwhite residents in segregated areas was also substantially larger than other metro areas on the list.

More concentrated segregation nationally can be to attributed to a combination of two factors, according to Stancil, in a tweet thread accompanying his chart: “1. Longstanding patterns of black-white segregation, and 2. Very rapid increases in the nonblack, nonwhite population, happening pretty much everywhere.”

“There is, believe it or not, a silver lining here. The flipside of this process is that WHITE segregation is rapidly declining – a much, much higher share of the white population is exposed to racial diversity than in earlier years, primarily Asian and Hispanic people.”

But why is the change so much more pronounced in Las Vegas than in other cities?

Contacted by email, Stancil responded with some analysis, and some maps that had been prepared for metro areas by Institute on Metropolitan Opportunity.

In 2000, Stancil said, most neighborhoods in the Vegas metro were either predominantly white or integrated:

“But by 2010,” Stancil said, “virtually no predominantly white neighborhoods were left.”

The rapid shift is mostly due to Hispanic in-migration.

“What’s happened, though,” Stancil said, “is that while Hispanic population increased everywhere, black residents were already concentrated in places that were relatively racially diverse. So when those places experienced rapid Hispanic population growth, many of them immediately tipped over and became predominantly nonwhite.”

“In short, segregation increased because many black families had been living in integrated neighborhoods that became segregated, rather than actually moving to a new, segregated area,” Stancil said.

Stancil said the changes in Las Vegas are happening at an unusually rapid rate, but that the kind of diversification it is experiencing is fairly common around the country.

“In most regions, the suburbs are becoming rapidly more racially diverse (and poorer), and as that happens, many existing white suburban residents are moving further out to the exurbs,” wrote Stancil. “As a result, neighborhoods can tip from being predominantly white to being nonwhite segregated much faster than you’d expect – often in two decades or less.”

Census Bureau projections indicate that the proportion of the population that is white will drop below 50 percent by the year 2042 as a result of increased diversity.

Decades of social science research has shown that exposure to diversity, especially at a young age, can make people less likely to form racial stereotypes and more comfortable in racially mixed settings, said Stancil. He gave the example that Republicans underperformed during the 2016 presidential election among white people in many integrated areas (a phenomenon that can be seen in Southern Nevada), a race where Republican presidential candadite Donald Trump campagined on an anti-immigration rhetoric.

However, some studies have shown that increasingly diverse racial landscapes can affect white Americans’ racial attitudes in a negative way.

Results of a 2014 study revealed that exposure to information about changing demographics evokes a “perceived threat to Whites’ societal status” and greater explicit and implicit racial bias.

This effect has been replicated in other studies, including one in 2012 that reported similar findings in both white Americans and white Canadians.

“In the meantime, though, the increasing segregation of black Americans will have real and terrible effects on those families. It cuts them off from networks of educational and economic opportunity, and perpetuates the nation’s longstanding racial caste system,” wrote Stancil.

Metro predominantly white and male as it nears milestone  by Dana Gentry August 2, 2021
How the child tax credit became a lifeline for Nevadans: 'It… by Michael Lyle December 27, 2021
‘Sitting on a time bomb’: Mobile home residents at risk in… by Ariana Figueroa April 12, 2022