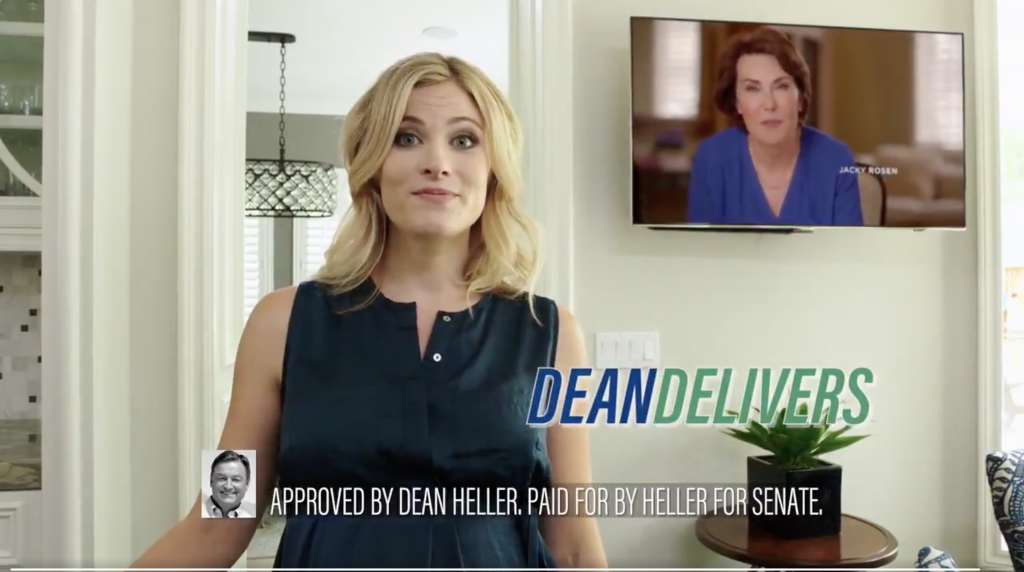 One week after a poll showing women strongly prefer his competitor, Sen. Dean Heller and his campaign are making an appeal to female voters.

Heller’s campaign on Wednesday released a new 30-second ad — titled “Action” — featuring women talking about Heller’s accomplishments. Among the things highlighted in the spot are Heller’s “breaking with his party to reauthorize the Violence Against Women Act; passing legislation to protect children in their schools; and Heller’s work to deliver justice for victims of sexual assault.”

“Action” is Heller’s second television ad for the general election, according to a campaign press release.

A day before the ad launched, the Heller campaign announced an 806-woman coalition called Women for Dean. The press release announcing that coalition credited Heller with expanding access to mammograms in rural communities and being part of the bipartisan Pregnant Workers Fairness Act. The coalition features state assemblywomen Lisa Krasner and  Jill Tolles, who represent parts of Washoe County.

The appeal to women and women’s issues comes one week after a political poll suggested Heller was coming up short with them. A Reno-Gazette Journal-Suffolk University poll released last week showed Heller and his challenger, Democratic Rep. Jacky Rosen, nearly tied overall. However, when broken down by gender, the tides turned in favor of Rosen: 47 percent of women polled said they were leaning toward or already supporting Rosen, while only 31 percent said the same about Heller.

Rosen for Nevada spokesperson Molly Forgey had this response to Heller’s appeal toward women: “Senator Heller is trying to distract from his real record in Washington of opposing bills to ensure women earn equal pay for equal work, attacking women’s reproductive rights, jeopardizing their access to health care, and voting nine times to defund Planned Parenthood health centers. Senator Heller is clearly struggling with women voters because he can’t be trusted to stand up for them in Washington, which is why women across Nevada are going to repeal and replace Dean Heller and send Jacky Rosen to the Senate in November.”

Meanwhile, American Bridge and UltraViolet PAC placed Heller on its “Worst for Women” list and launched a five-figure digital ad buy that will run on Facebook, according to the Washington Examiner. Among the issues they highlight: Heller’s “deciding vote in a bill to undermine the Title X Family Planning Program which serves four million low-income people.” The Worst for Women list includes two U.S. senators and 13 house members — all Republicans.

Texans go to the polls under sweeping new voting… by Kira Lerner March 1, 2022
Board of Regents races in Clark County bring both newcomers… by April Corbin Girnus May 24, 2022
Did the assault weapons ban of 1994 bring down mass… by Michael J. Klein June 16, 2022