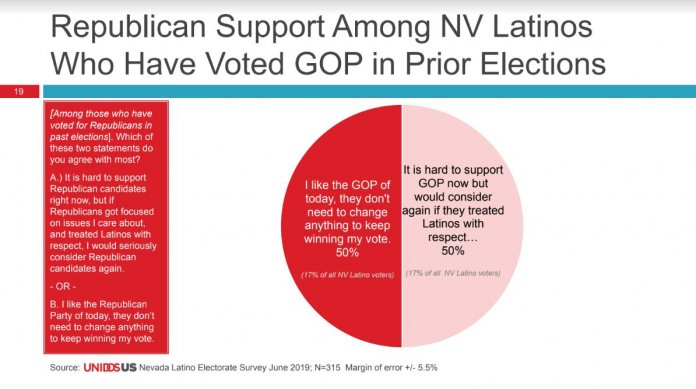 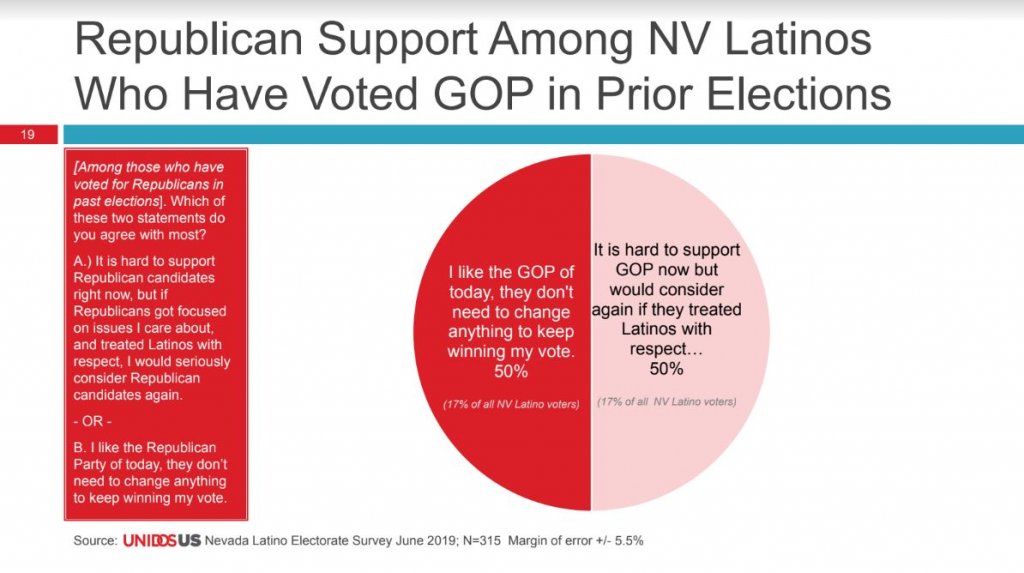 Nearly nine out of ten Latino voters in Nevada say they’ve felt “frustrated” with how President Donald Trump and his allies treat immigrants and Latinos, and worry that things could get worse if he were reelected.

Those frustrations could be eating into already limited Latino support for the Republican Party, according to a new survey released this week by the Latino advocacy group Unidos US and polling firm Latino Decisions.

The survey polled 1,854 eligible Latino voters, including 315 in Nevada, using online and telephone interviews between June 1 and 14. The state sample margin of error is +/- 5.5 percentage points.

In Nevada, 34 percent of Latino respondents said that they have voted for a Republican candidate in past elections. But within that group, 50 percent agreed it was hard to support the party’s candidates in the current environment, though that they would consider voting for a Republican if they “focused on issues I care about and treated Latinos with respect.”

Among issues all Latinos surveyed most cared about were jobs and the economy came out as their first priority at 25 percent. Health care (17 percent) and immigration (16 percent) followed as top issues.

The top immigration policy priority among Latino voters is “Stopping the Trump Administration’s practice of separating undocumented children from their parents at the border” followed by comprehensive immigration reform, according to the survey.

Protecting health coverage for those with preexisting conditions and increasing federal funding for education were the highest priorities for Latino voters when asked what makes them more likely to vote for candidates, both coming in at 61 percent.

During a forum Wednesday, Democratic lawmakers and representative for Unidos US discussed the survey’s findings and economic conditions in Latino communities.

“We found that even though Latinos in Nevada are doing better in most cases than they were in 2007 when the great recession began, Latinos are still not doing as well as all Nevadans,” said Jennifer Brown, Associate Director of Economic Policy at UnidosUS.

“We know that childcare and housing — especially rental housing—are really eating away at people’s budget. We know that combined together, for most Latinos in this country, that’s about half of their talk home pay.”

Booker: “You can tell a lot about a country by who...