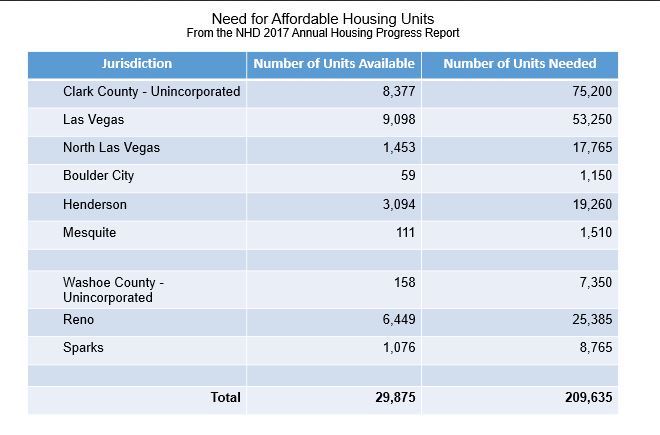 The Seniors Affordable Housing Tax Credit Act attempts to address Nevada’s housing crisis by giving credits to landlords who choose to rent properties to low-income seniors — the text of the bill hadn’t been submitted as of Friday. In announcing the bill, Heller cited National Low Income Housing Coalition data that ranks Nevada in the top 25 percent of the highest housing costs in the nation.

According to the description of the bill in Heller’s announcement, the legislation allocates tax credits to states, “which, in turn, will be awarded to owners and developers who choose to rent their properties to low-income seniors.”

Despite a severe shortage of affordable housing in Nevada, the issue has been mostly absent on the Nevada campaign trail.

Heller’s legislation is not the only affordable housing bill introduced in Washington in recent months, however.

Harris introduced the Rent Relief Act in July, which would create tax credits for individuals who are paying more than 30 percent of their gross income toward rent and utilities.

Warren’s bill, the American Housing and Economic Mobility Act of 2018, looks to address the lack of affordable rental homes for low-income individuals and expands protections against discriminations. The bill invests $45 billion annually into the Housing Trust Fund and gives local governments incentives to reduce barriers driving up housing costs.

“The proposal expands investments in proven solutions – like the national Housing Trust Fund – at the scale necessary to help millions of the lowest income families who today face impossible choices between paying rent and putting food on the table, buying medication, or saving for a rainy day,” said Diane Yentel, the president and CEO of the National Low Income Housing Coalition, in a statement.

In addition to advocating for legislative solutions, the coalition also makes the connection between how the lack of livable wages impacts housing and rent affordability.

In Nevada, in order to afford a one-bedroom unit a person needs to at least make $14.84. That’s despite the fact that Nevada’s current minimum wage is $7.25 per hour for employees who receive health care through their employer and $8.25 per hour for those who don’t.

The organization estimates a worker would need to work at least 72 hours a week to afford rent on the lower end.

Heller has voted against past efforts to increase the federal minimum wage. He recently said that there shouldn’t be a national minimum wage and that raising rates should be up to individual states, according to the Associate Press.

A Nevada legislative committee was formed to address the state’s affordable housing crisis. One proposal from a June meeting looked at transferable tax credits for housing developers.

A spokesperson for Rep. Jacky Rosen, Heller’s Democratic opponent, could not be reached Friday afternoon.