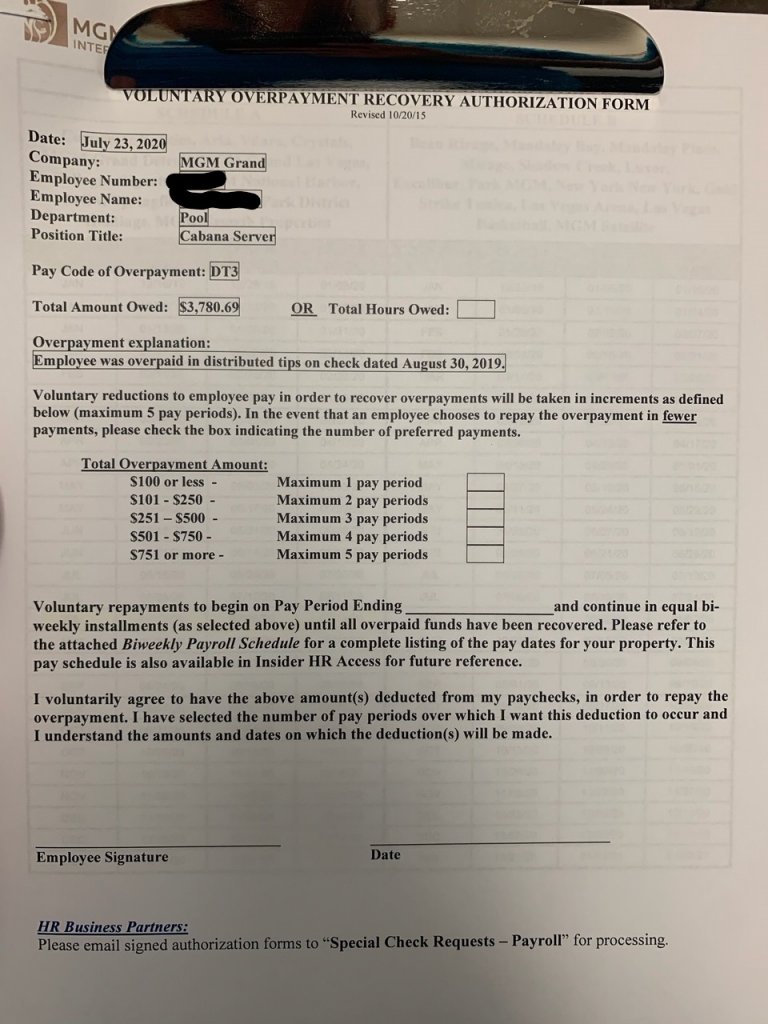 The timing couldn’t have been worse for MGM employees who were notified in July they’d been overpaid a year ago (when times were good) and now owe the company, in some cases, thousands of dollars.

“Voluntary reductions to employee pay in order to recover overpayments will be taken in increments as defined below (maximum 5 pay periods,)” said the letter notifying one MGM cabana server who had been paid $3,780 too much and would have it deducted from upcoming checks. The employee just had to sign the “voluntary” agreement.

“No one signed it,” says one cabana server who asked not to be named for fear of losing her job. She’s collecting copies of the letter from her co-workers. Estimates of the total owed by employees is as high as $75,000.

That’s a fortune to the workers but a relative pittance to the company, which enjoyed a surge in its stocks price earlier this month when Barry Diller announced his company, IAC, has been buying up a 12 percent stake in MGM Resorts International during the last year, valued at $1 billion.

The tips were paid to employees last year on Aug. 30, 2019 when MGM told the workers their previous paycheck had been short, according to documents provided to the Current by workers.

“A supervisor told us the money was our back pay and she was the one that said not to worry about it.  She’s now the one coming back trying to get that money back,” said a cabana worker who has been collecting copies of the assessments from her co-workers.  “We are making way less now.”

Some employees turned to Culinary Local 226 for help, according to a grievance form.

Now, MGM says it’s had a change of heart.

“We won’t be collecting those overpayments,” said spokeswoman Debra DeShong, who declined to say why or provide details such as how many employees were asked to return the overpaid wages. “Since we’re not collecting them I’m not going to comment.”

Workers were unaware Monday the company was rescinding the “voluntary” demand for payment.

“I need that in writing,” one cabana worker said when told by the Current. “Last week they were trying to get us to turn in paperwork.”

A spokeswoman for Culinary Local 226 was unaware MGM was attempting to collect the back wages.

Nevada is one of twelve states where an employee “is not liable for the amount of the overpayment if recovery would be against equity and good conscience, as long as there is no showing of fraud or intentional misrepresentation or nondisclosure,” according to the Department of Labor.

Note to candidates: Taxing 1% must be paired with unrigging Trump’s...

#MeToo: An overnight phenomenon after only 11 years