Only 4% of LV apartments on market going for $1,000 a month or less, market tracker says

At a time when recent reports from UNLV researchers show that in Southern Nevada “7 of the 10 most common occupations do not earn the income needed to afford rent for a studio apartment”, June 2022 market trends compiled by the online housing search platform Rent.com confirms that it might be impossible for much of Southern Nevada’s workforce to afford apartment rent. 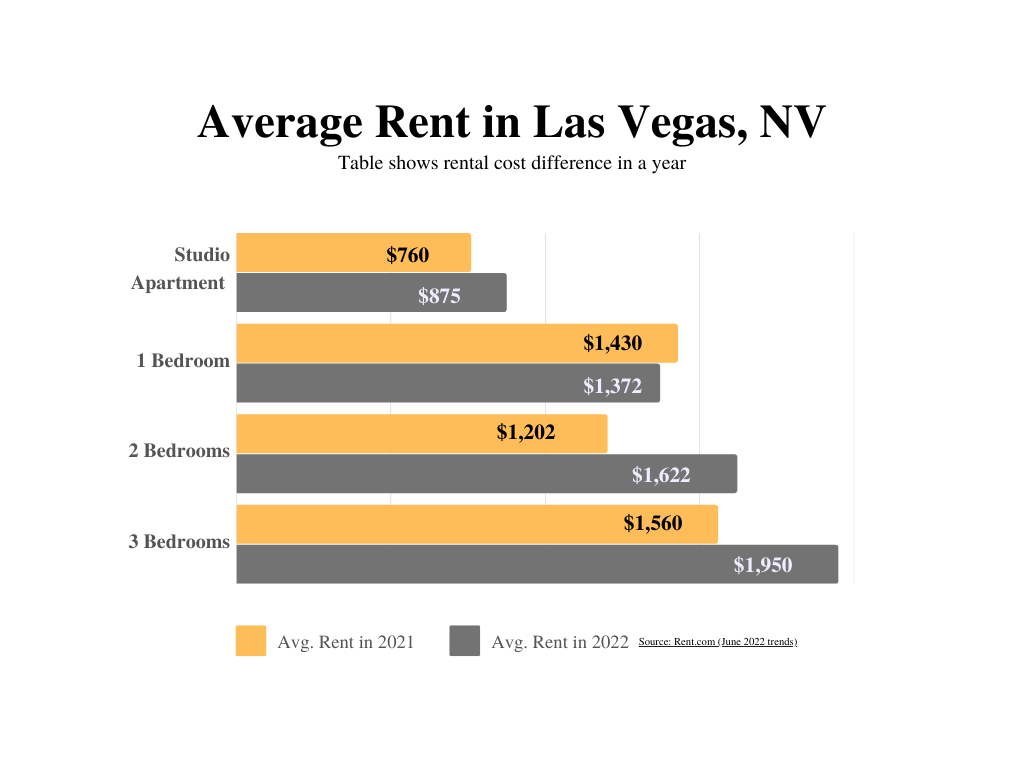 Statewide, the cost of rent has increased 20% in the last two years which is preventing many from finding affordable places to live in.

The U.S Department of Housing and Urban Development defines affordable housing as a situation in which people do not have to spend more than 30 percent of their income on housing and utilities.

To be able to afford a studio apartment in Las Vegas (Downtown and South LV) at the current rate of $875, a family/individual will need to have an annual income of  about $36,000.

However, the most common occupation in the Las Vegas area is a retail salesperson (a job held by 28,590 workers according to UNLV’s findings) with median annual wages of  $25,570 a year.

According to Rent.com, there is no availability of apartments with prices ranging from $501 to $700, making it impossible for typical retail salespersons to afford a studio apartment in Las Vegas.

In some individual neighborhoods, the rents are substantially higher.

Priced at $1,674, the average cost of a studio apartment in places like Centennial Hills and Lone Mountains have seen a 53% increase from last year.

Only 4% of LV apartments on market going for $1,000 a month or less, market tracker says

Kingkini Sengupta writes for the Current as a Summer 2022 States Newsroom Fellow. She is currently pursuing her master’s degree with the Reynolds School of Journalism at the University of Nevada, Reno. A former broadcast producer, she has a newfound love of reporting and writing. She has a Diploma in Social Communications Media from SCMSophia, University of Mumbai, India and has also done her Bachelor's in English Honours from University of Calcutta, India. She has also worked for six and half years with two Indian news channels: New Delhi Television (NDTV) and Republic TV. Kingkini loves traveling, experimenting with new recipes in the kitchen and playing with dogs. She uses food to bond with people she does not know. Someday besides being a successful multimedia journalist, she would love to open her own Indian restaurant and chai cafe in the United States.