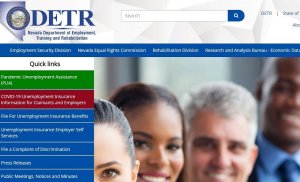 It’s of little comfort for Nevadans who spent countless hours on hold and weeks or months waiting to receive their benefits, but Nevada’s Department of Employment, Training and Rehabilitation’s unemployment insurance system, which runs on software from the early 2000s, might finally get the overhaul it needs.

The money would be allocated from the American Rescue Plan Act, signed into law by President Biden on March 11, which is expected to deliver $2.9 billion to Nevada (plus $1 billion total for county and local governments). The funding is designed “to meet pandemic response needs and rebuild a stronger, and more equitable economy,” according to the Treasury. The measure gives states some flexibility in fund allocation, although states must adhere to guidance issued by federal agencies.

The $54 million for DETR would go towards immediate improvements to speed up claim processing and to a modernization project that would unfold over several years, Elisa Cafferata, director of the Nevada DETR, explained in Monday’s hearing.

When Covid struck, DETR was understaffed and underfunded. They hired more people and redeployed staff from the Division of Welfare and Supportive Services, but infamously struggled to respond to the influx of unemployment claims.

Nevada’s unemployment rate as of last month was still the sixth highest in the nation at 8 percent, compared to the national average of 6.1 percent.

The funding follows the guidance of an independent analysis, which found that DETR would be better off starting over entirely than trying to fix its existing system. The analysis, from the National Association of State Workforce Agencies, cited DETR’s dated, complex software, and reliance on third-party products that aren’t updated or supported.

Modernization would include the costs of one-time computer programming, hiring consultants to assist with project management, and adopting cloud-based technology. Marilyn Delmont, chief information officer at DETR, said of the 20 states that have modernized with NASWA’s guidance, the 13 that are based in the cloud have fared better during the pandemic because the system can be updated more quickly.

Several members of the Ways and Means & Finance Committees raised concerns about the timeline of the modernization project, citing their constituents’ ongoing challenges receiving their benefits.

“What I’m not hearing in this discussion is actual benchmarks and dates that we can measure success on,” Assemblywoman Brittney Miller (D-Las Vegas) said.

“Do you have a wish timeframe that you’re shooting for?” asked Assemblyman Tom Roberts (R-Las Vegas).

Echoing the refrain DETR officials and the governor have delivered throughout the pandemic, Cafferata told lawmakers the agency has been working diligently to improve the backlog of claims, and will continue doing so.

“When I started, the backlog for claims that needed to be processed was in the hundreds of thousands,” Cafferata said. “The backlog is now in the tens of thousands, and those are the more complicated cases.” Moreover, Nevada did not shut down its website like several other states did, she noted, and they adopted interim staffing and technology measures to speed up unemployment disbursal.

Chair of the Assembly Committee on Ways and Means Maggie Carlton (D-Las Vegas) said the question of timing is especially difficult to answer because it is unclear when the federal government will dispense the American Recovery Act funds. The funds do have a clear end date though, December 2024, when the project must be complete.

Moreover, Cafferata emphasized, the modernization project is geared toward a future, rather than the current, crisis. What Nevadans will get out of a modernized system, she said, is a better response in the next economic crisis.

Carlton said that a DETR overhaul was urgently needed after the 2008 recession, but “when the state had such huge needs—education, mental health, public safety” and an unemployment rate of 3 percent, it wasn’t politically feasible to overhaul the system.

“We would’ve been in a much better place if we’d had the foresight to modernize the system from 10 years ago,” said Assembly Speaker Jason Frierson said.

DETR officials made a case for upgrading the agency’s systems during the pre-pandemic 2019 legislative session, but a bill to do so didn’t get through the Legislature that year.

CCSD now teaching students it's OK to plagiarize by Carrie Kaufman March 2, 2021
How the child tax credit became a lifeline for… by Michael Lyle December 27, 2021
How despite losing multiple rulings, Station keeps… by Clara Bates July 14, 2021