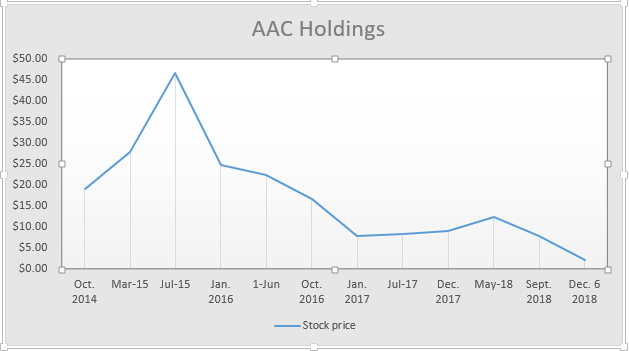 American Addiction Centers, one of the nation’s largest for-profit drug and alcohol recovery chains, with facilities in Las Vegas, is closing centers in California and Louisiana and laying off employees, including an undisclosed number of workers in Las Vegas.

The Current has obtained an email addressed to all AAC staff, in which CEO Michael Cartwright notifies employees of the closure of the company’s San Diego Addiction Treatment Center, discloses the layoffs, and says the company is “exploring strategic options” for facilities in Louisiana.

“While AAC will continue to save lives of those seeking our help, as a publicly-traded company, we have a responsibility to be good stewards of our financial resources: this responsibility includes a strategic focus to improve the overall quality and efficiency of operations within the company,” Cartwright wrote in the email.

The company has been plagued by allegations of conflict of interest relating to its drug testing business and was targeted by short-sellers.  In July, Cartwright testified, along with other industry representatives, before a congressional subcommittee examining online marketing practices in the addiction recovery industry.

AAC was also charged with murder in California in connection with the death of a patient.  The charges were ultimately dismissed by a judge. But critics point out AAC failed to disclose patient deaths in its initial public stock offering.

A spokesperson says the company is laying off “a small amount” of employees in Las Vegas.

“For several years AAC has saved thousands of lives in our treatment centers around the country,” the spokesman said.  The decision to close the facility was not made lightly and our top priority remains serving our patients, including those currently at San Diego and Townsend. This was a business decision made to help enable AAC’s longterm success,” the spokesman said.

Author’s note:  The original version of this story included a statement from AAC’s spokesman that the company was closing its Louisiana facilities.  The company has retracted that statement and says it is exploring its options.

War and sanctions on top of COVID-19 mean more trouble ahead… by Tinglong Dai March 14, 2022
Board of Regents races in Clark County bring both newcomers… by April Corbin Girnus May 24, 2022
What to the slave is the Fourth of July? by Frederick Douglass July 4, 2022