Sampling of 2021 white supremacist propaganda from across the United States. (Image courtesy of Anti-Defamation League)

Dissemination of white supremacist propaganda remained historically high nationwide in 2021, according to a new report from the Anti-Defamation League. In Nevada, numbers dropped from a massive spike in 2020 but remain elevated over earlier years. 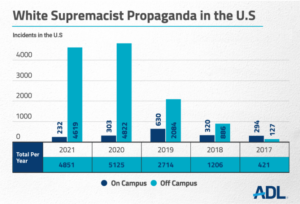 According to the ADL, 4,851 incidents of white supremacist propaganda dissemination were reported across the country in 2021, compared to 5,125 in 2020. That represents a 5% drop. But 2021 saw a 27% increase in the number of antisemitic propaganda distributions.

Twenty-eight incidents of white supremacist propaganda were logged by ADL in Nevada in 2021. They included a neo-Nazi group distributing propaganda at UNLV that showed an image of a swastika and read: “One folk. One family. One fatherland” and “America Awake.”

In 2017 and 2018, there were three and eight incidents, respectively. ADL began publishing data on the distribution of white supremacist propaganda in 2017.

Of those 28 incidents of white supremacist propaganda last year, 15 were also classified as anti-Semitic.

All three groups were active in Nevada last year.

Patriot Front often avoids using traditional or explicit white supremacist language and symbols in favor of a “Patriot Nationalism” aesthetic, according to the report. But the group’s activities around the country last year included “destruction of Black Lives Matter statues and murals, stealing and burning pro-diversity and pro-LGBTQ yard signs and flags and distributing propaganda at Jewish institutions.”

In Nevada, Patriot Front propaganda was distributed in Las Vegas, Reno and Battle Mountain. They included messages such as “America First,” “America is not for sale,” “Reject poison” and “United we stand.”

FRM and NJEHA meanwhile used explicit white supremacist language and neo-Nazi symbols, including crossed eiwaz runes fashioned to resemble a swastika. In August 2021, FRM hung a banner on a Las Vegas freeway overpass that included a Star of David and the message: “Death to Israel.” Other materials distributed by the group included swastikas alongside the message “smash white guilt.”