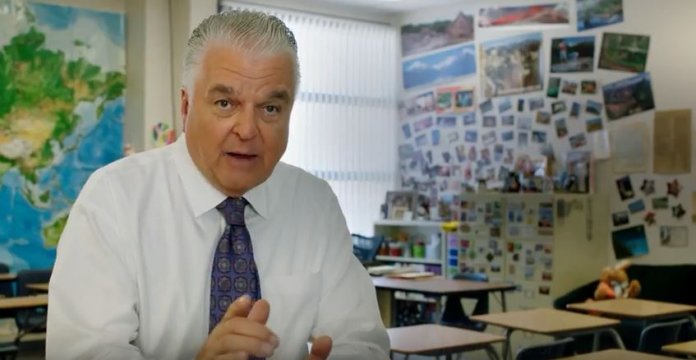 Sisolak released a pair of ads over the weekend that all but gush over Sandoval and his signature accomplishments.

In one of the ads, Sandoval even makes an (unauthorized, presumably) appearance.

“When Governor Sandoval did the right thing, and increased funding to reduce overcrowding and give teachers a raise, Adam Laxalt opposed it,” Sisolak says over images of the man to whom Sisolak hopes to hitch his star.

Neither reducing overcrowding nor giving teachers a raise were the specific selling points that were shopped by Sandoval and state Senate Majority Leader Michael Roberson while leading the charge to raise taxes on business to fund education. It was more of a general acknowledgment that Nevada education was severely underfunded in every respect, and – the requisite Republican rationale – gosh, that’s bad for business.

Sandoval’s smiling face doesn’t appear in a companion ad from the Sisolak campaign. But it’s an ad Sandoval might have aired if he were running. The ad is even named after one of Sandoval’s favorite slogans: “New Nevada.”

An homage to the conventional “exciting jobs of tomorrow” trope that has been the hallmark of Sandoval’s approach to the economy, the ad highlights Tesla, Switch, and the greater Reno metropolitan statistical area, and marvels at the “thousands of high-wage jobs” that are being created.

“But here’s the thing,” Sisolak says. Then he vows to boost technical training in schools and apprentice programs and “partnerships with business” to prepare Nevada workers for all those high wage jobs, “because new Nevada jobs need to go to Nevada workers.” 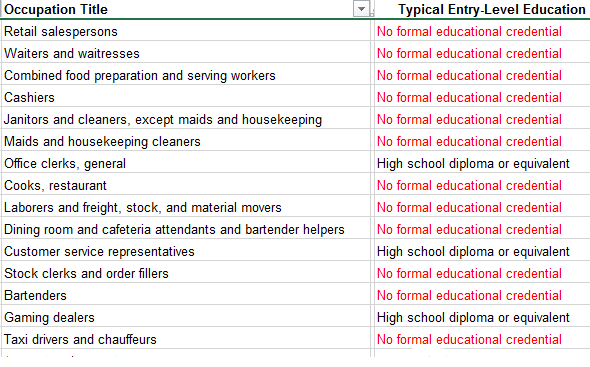 Those jobs, by the way, will account for 6 of every 10 jobs projected to open in Nevada through 2024.

The “new Nevada” of Sandoval and Sisolak (Sandolak? Sisoval?) may create thousands of new jobs. And that’s great. But there are 1.5 million people in the Nevada workforce. At least a quarter, probably closer to a third, of their jobs are not high wage, not exciting jobs of tomorrow, not even the “new Nevada” — unless you acknowledge that the new Nevada is going to look a lot like the Nevada we’ve already got.

Whether the governor is Sisolak, Sandoval, or even the new kid, if we could wave a magic wand (perhaps invented through an innovative joint venture between grand wizards Elon Musk and Rob Roy) and suddenly every working-age human in Nevada had advanced technical training befitting the “new Nevada,” the most common jobs in the state would still be serving food, working retail, and cleaning up after each other. Because those are the jobs we have. They’re also the jobs on which Nevada’s economy depends. And we are going to continue to have very, very many of those jobs for a long, long time — certainly longer than a governor’s term.

Training and apprenticeships and all the things that Sisolak talks about in his ad, which is to say all the things that Sandoval has been talking about for years, are fine — though it’s still not clear why private companies can’t spend their own money to show employees how to use the robot arm.

Bur far more urgent to far more working Nevadans is the need to raise wages, provide benefits and improve working conditions in the jobs we’ve already got. Preferably, a governor would commit to four years of working on that, instead of another four years of granting public subsidies to private entities while chanting “new Nevada.”

Poor Mike Bloomberg has to come to Nevada after all