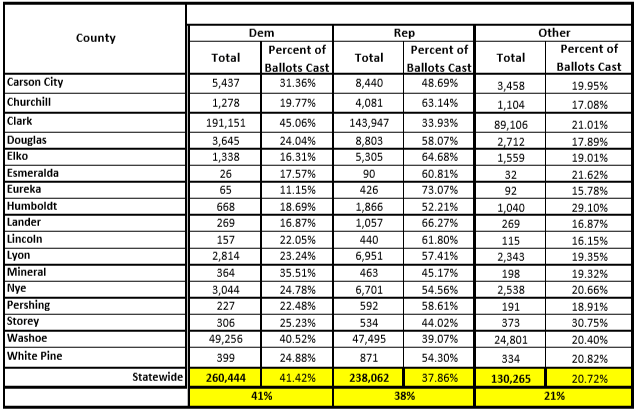 By the end of early voting Friday night, nearly 629,000 voters have already cast ballots in Nevada — about 75,000 more than the total number of people who voted in in 2014, including those who voted on Election Day. Again, 2014 was a very low bar. Still, most impressive.

Here are the totals from the secretary of state’s office, as of Saturday morning. These totals also include absentee ballots.

Here’s another piece of the totals, showing turnout by percentage. 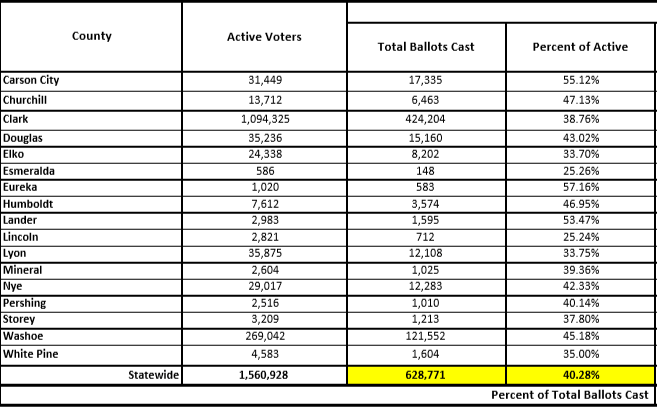 The 424,204 people who voted in Clark County is about 83,000 more than voted in the election (including Election Day) in Clark in 2014. It represents 38.8 percent of the county’s active voters. When 83,000 fewer people voted four years ago, they represented 41.5 percent of active voters. In addition to reflecting the robust effort to register voters during this cycle, that suggests there still might be a good amount of room for growth in Clark on Tuesday.

As he has throughout early voting, Jon Ralston has dived deeply into the numbers on his Early Voting Blog (which should be renamed the Clark Firewall Blog in 2020, IMO). Some of his down-ballot analysis, specifically of the legislative races and the possibility of Democratic supermajorities, is particularly intriguing.

Long story short, Democrats have to be encouraged. But while Democrats have an edge going into Election Day, it should be remembered that no one actually knows how they voted. The “Tom Collins for Adam Laxalt” wing of the Democratic Party is, like Collins himself, probably just an oddity — but we don’t know. For that matter, the “Storey County Republican Developers for Steve Sisolak” contingent may reflect a substantial crossover vote for the Democrat, or it may not.

And the “others” — independents and third party folks — are a mystery. Democrats should be wary of them. For instance, over the years they’ve typically broken for the Republican in CD3, and a Democrat has never won in that district in a midterm. Susie Lee has what looks like the strongest-ever shot of making that happen. But in that race, as in all of them, there’s still Tuesday.

Shall we call it a “mob” of early voters?

Lone GOP Rep. Amodei: ‘Now I am a collector’s item’

Thanks for visiting Nevada, Beto. Now don’t come back.