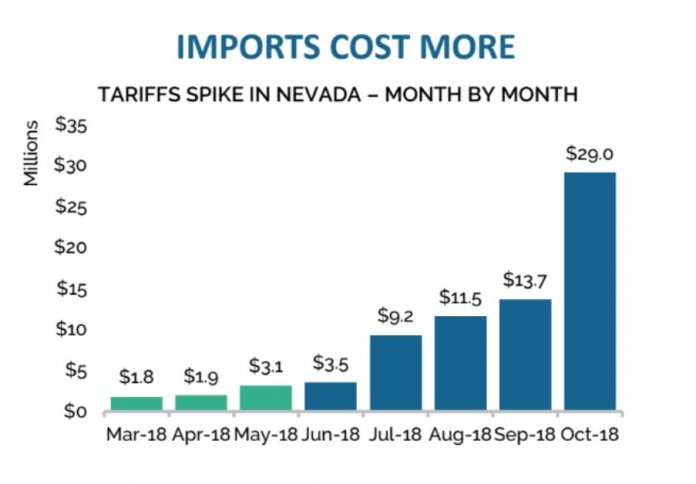 Nevada businesses are paying as much as 11 times more in tariffs than they were prior to President Trump launching a trade war with China, according to a group that opposes the tariffs.

In conjunction with CES, Tariffs Hurt the Heartland released data this week showing showing that in October 2018, the most recent month for which data was available, Nevada businesses paid $29 million in tariffs on imports – and $52 million in additional tariffs since the trade war began. The October 2018 price tag is more than 11 times higher than the cost of tariffs paid on the same products at the same time last year, the group said.

“Tariffs are taxes that make it harder for American businesses to make and sell their products, pay their workers and keep their doors open,” said Tariffs Hurt the Heartland executive director Brian Kuehl said in a statement. “From consumer electronics to farming, American businesses and workers are suffering under the weight of tariffs and paying for a trade war that has failed to achieve any of the administration’s goals. Costs are increasing by the month, exports are down, and the toll on our economy will only continue to grow.”